The European New Car Assessment Program (Euro NCAP) held a Global Vehicle Target (GVT) Familiarization event on April 12-13, 2018 in Upper Heyford, UK, to introduce the automotive industry to the an updated version of DRI’s Soft Car 360, which has been selected as the official Euro NCAP car target for the upcoming 2018 and 2019 test seasons.  At the event, vehicle manufacturers, tier 1 suppliers, and others had the opportunity to see the GVT firsthand and make their own radar and other sensor measurements of it. 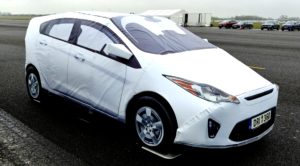 The following excerpt is from the event invitation by Thatcham Research, on behalf of Euro NCAP:

“In 2018 Euro NCAP introduces the Global Vehicle Target (GVT) for use in the active safety testing elements of the rating scheme. The GVT provides the full 3D representation of a passenger car necessary for the more comprehensive testing scenarios introduced in 2018, and it replaces the old Euro NCAP Vehicle Target (EVT) which represented the rear end of a vehicle. The industry has contributed to the development of the GVT, evaluating modifications to optimize the fidelity of the target for today’s automotive sensors.”

For more information about the GVT, or to order go to the DRI ATS website and request a quote for the Hatchback (GVT) model.

The NFL has announced that the team of Dynamic Research, Inc  and 6D Helmets LLC  has been named the Grand Prize winner of the Head Health Challenge III competition to develop advanced materials for impact mitigation. The DRI/6D team and four other competitors were selected from 125 applicants in December 2015 to receive Round One awards of $250,000 to develop materials that absorb both linear and rotational impact forces. The competitors were competing for the $500,000 Grand Prize which was announced Wednesday.

Through research in recent years, it has become clear that the severity of a concussion is heavily influenced by the rotational acceleration experienced by the head during the impact. Traditional helmet materials reduce the risk of skull fracture and severe head injuries in linear impacts but are not specifically designed to reduce rotational impact forces and provide limited protection against concussions. With the recent focus on concussions in football, improvements are needed in order to better protect against these relatively more common injuries without compromising the protection against skull fracture and other severe head injuries. The DRI/6D winning material design uses 6D’s Omni-Directional Suspension technology in which two layers of foam are separated by columns of another material. The columns allow the two layers to “shear” relative to each other in the angled impacts that can induce rotational forces, potentially reducing the rotational acceleration of the head.

The DRI/6D material was developed using LS-DYNA finite element simulations. The simulations revealed that the shear performance of the material could be adjusted without affecting the linear performance by detaching some of the columns from the upper layer of foam. The material was then optimized by running simulations across a range of impact velocities and a range of design parameters which included foam material, thicknesses of the layers, column diameters, column lengths, column spacing, and percentage of columns attached. The decoupling of the linear and shear performance is a key feature of the material.

Terry Smith, a Technical Director with Dynamic Research and the Principal Investigator for this project said “We would like to thank the NFL and its partners for sponsoring this important project. We are excited to continue development of the 6D technology. We believe this technology has the potential to really make a difference, by reducing the frequency and severity of concussions in multiple impact sports such as football. We’re looking forward to continuing the development of a helmet that incorporates this material.”

Bob Weber, CEO and Co-Founder of 6D Helmets stated “Obviously we’re thrilled to be named the winners of the NFL’s Head Health Challenge III along with our project partner Dynamic Research. Together we worked strategically to further develop our Omni-Directional Suspension technology for application into multi-impact helmets. This challenge allowed us to exercise material testing and analysis that further unlocked the true potential of our excellent energy management technology (ODS). This award will allow continued investment into the development of a multi-impact helmet solution for many sports activities in the future. I want to thank the NFL, GE, Under Armor, and NIST for sponsoring this challenge, and driving research in a positive direction to improve helmet performance and brain protection.”

Dynamic Research Inc.(DRI) , recently conducted a study for the American Automobile Association (AAA) together with the Automobile Club of Southern California’s Automotive Research Center in the Spring of 2016 which involved the use of the Guided Soft Target (GST) Test System (Low Profile Robotic Vehicle and Soft Car 360®) to test the Automatic Emergency Braking (AEB) capabilities of several different vehicles.

The study described by AAA

Dynamic Research Inc.(DRI), in collaboration with 6D Helmets LLC, has been announced as one of five winners of Round 1 of the Head Health Challenge III to develop advanced materials to improve impact safety. The $250,000 award will support optimization, using the LS-DYNA finite element software, of 6D’s patented Omni-Directional Suspension (ODS) technology. The DRI/6D team is competing with the other Round 1 winners for the $500,000 grand prize. The Head Health Challenge is sponsored by the NFL, Under Armour, GE, and the National Institute of Standards and Technology in order to develop materials that will result in increased safety and protection for athletes, the warfighter, and civilians.